Dairy Defined: Correction – Dairy Demand Is Not at a 56-Year High. It’s at a 60-Year High.

One year ago, Dairy Defined debuted with a simple piece of myth-busting, noting that, for all the vegan-activist-inspired dreams of the “death of dairy,” dairy products are growing only more popular, with U.S. per-capita consumption at a 56-year high. This information is now out of date.

Increases in cheese and butter use last year pushed per-capita U.S. dairy to its most popular year since 1960. (People ate a little more ice cream too, but not thaaattt much more. Nothing to feel guilty about. Really.) Here’s the trend since 1975, when declining consumption stabilized and began to rise.

Yes, fluid-milk consumption dropped a little bit, and that’s always what dairy opponents like to cite when they talk about “decline.” Much of that decline, as we’ve noted, has to do with the rise of bottled water sales, not fake milk. But other dairy products more than offset the small fluid loss, with butter demand at its highest in more than five decades and cheese reaching another record, doubling its per-capita consumption from its levels during (speaking of cheese) the days of disco. 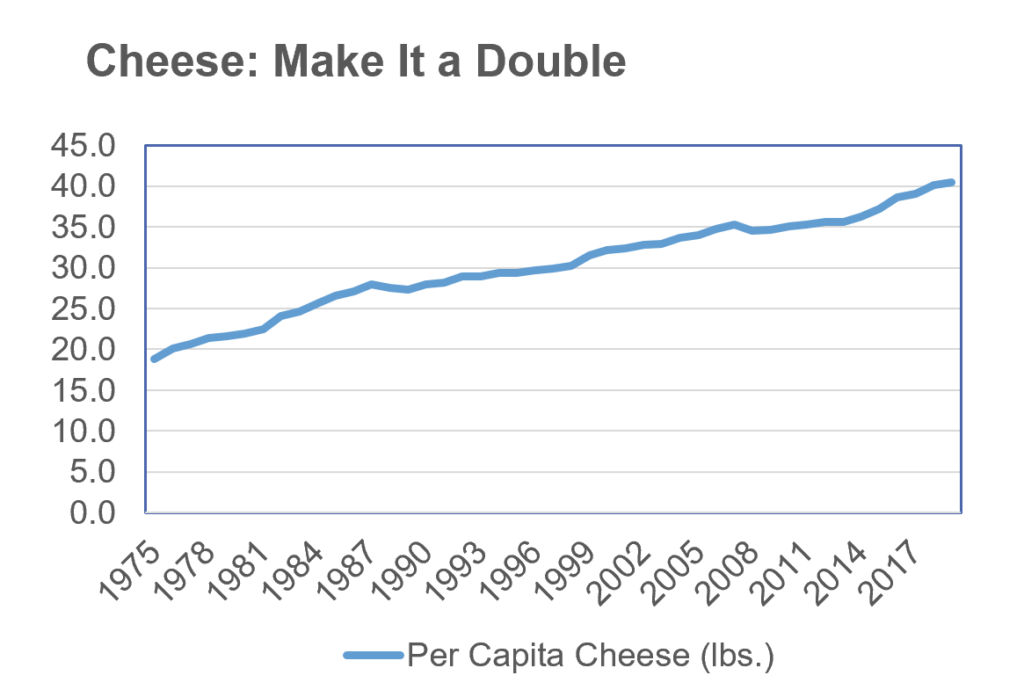 Even the fluid-milk numbers had its positives — whole milk consumption, for example, continued to rise, proving again that consumers are continually discovering that the more their milk tastes like milk, the more they like it. It’s worth noting that because these numbers are from 2019, aka Year 1 P.C. (Pre-COVID), it’s too early to tell how the pandemic will affect numbers next year. Restaurant and school disruptions have been a struggle that’s caused hardship for dairy producers. But robust retail sales bode well for the future, as did the emphatic vote of confidence dairy received from consumers when crisis set in.

Raise a glass to another milestone year in dairy demand. At Dairy Defined, the work of refuting the “death of dairy” is feeling a little bit easier than a year ago, though doing so remains as satisfying as ever, knowing that sometimes, actual facts still can carry the day. But the work is never done, as new myths inevitably arise. We look forward to dispelling them.

The deadline to sign up for @USDA’s Dairy Margin Coverage program has been extended to Jan 31! We thank @SecVilsack and @usdafsa for giving farmers extra time to consider their coverage needs and make choices that best fit their risk-management plans. nmpf.org/nmpf-statement… 12 hours ago