For years, a variation of this sentence has appeared in nearly every news story that touches on fluid milk consumption: “Milk sales are down while plant-beverages are rising.”

It’s easy shorthand to use because while it has been a factually accurate statement in its own limited scope, it can be used toward fantastical ends, such as overhyping the rise of plant-based drinks or crafting a false narrative about dairy trends when dairy, as a whole, is seeing its highest per-capita consumption levels in decades. The assertion will never require a correction in a newspaper, so it persists.

Except … it’s no longer true. The coronavirus crisis appears to be resetting consumer grocery habits, and early signs are that that some of these changes — including increased milk purchases — are continuing as the country re-opens. If current trends hold, milk’s revival may finally force a revision of one of the few non-fake talking points the “death of dairy” myth ever had.

This year’s data tells the story. While milk outsells plant-based imitators by a margin more than 10 to 1, 2020 began as another year of slow decline for milk sales in stores. And indeed, as the shorthand would have it, plant-based volumes were increasing. 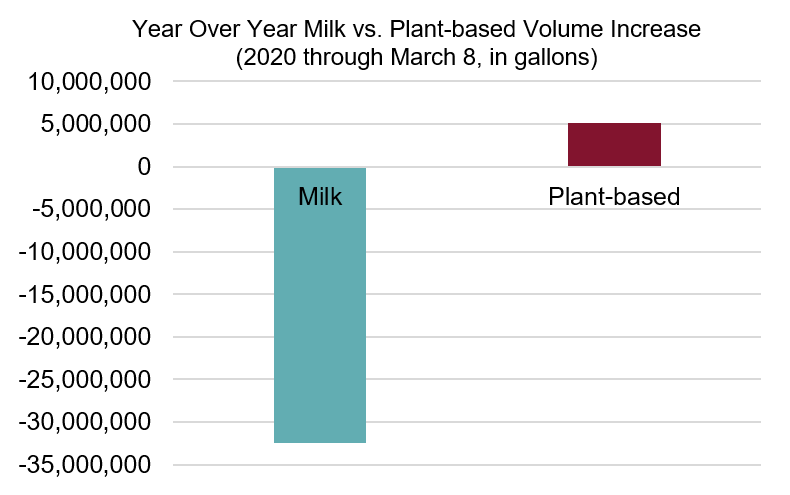 Then the crisis hit – and behavior changed.

As consumers emptied store shelves, both dairy and plant-based beverages saw gains – but the sizes of those gains were drastically different. While consumers bought 7.9 million more gallons of plant-based beverages during the two peak weeks in March than they did during the same period a year earlier, milk demand exploded by more than 45 million gallons, erasing its year-to-date decline in less than two weeks. 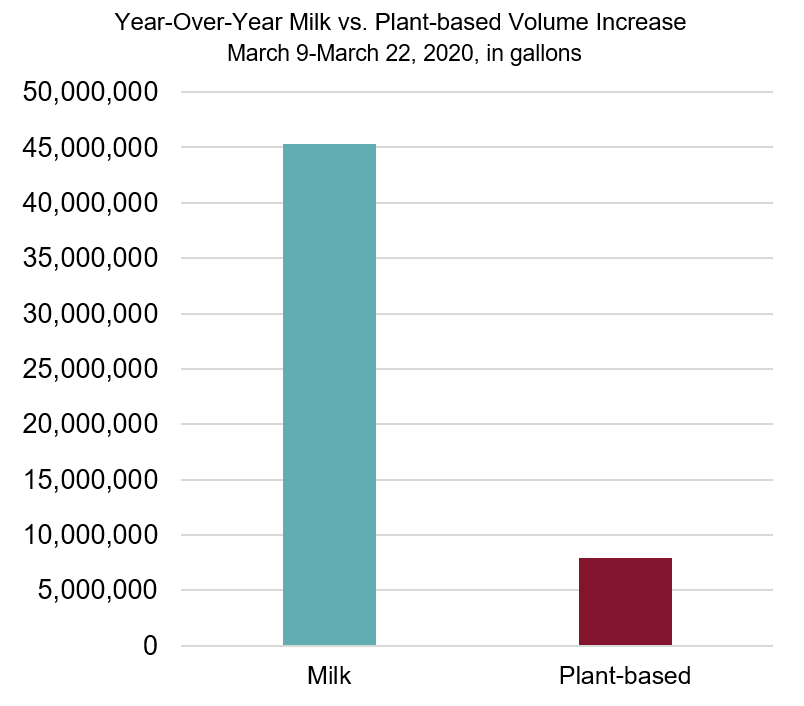 This dramatic turnaround was important for dairy farmers. Literally, retail consumers helped keep dairies in business as food-service orders disappeared and federal disaster assistance hadn’t yet arrived. But after the shock of lockdowns faded and everyone had already stocked up, something interesting happened: People still bought more milk. That five-to-one advantage established in March has stayed steady through May. 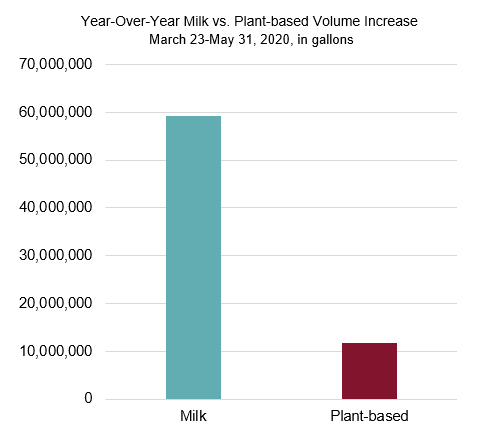 When times got tough, consumers seemed to want to return to the comfort of natural, wholesome and nutritious foods like milk, eschewing the marketing hype of plant-based imitators whose taste and nutrition profile stack up poorly against the real thing.

Future retail trends are tough to predict, especially in this environment. When life becomes more “normal” and as restaurants re-open, do consumers bring home as many bottles of milk from the grocery store? When schools return, do parents buy less milk for their children? These are open questions.

What we do know is this: Milk is back in grocery carts, in a big way. Its gains are much greater than its self-proclaimed competitors, and they’re showing signs of sticking. Consumers are navigating new grocery realities – and they are creating them as well. The return of milk may be one that’s built to last. That makes it time to pause the “milk is struggling” stories. And it means even less support for the “death of dairy” myth.