Say It Loud, Say It Clear: The Plant-Based Beverage Bust is Here

It was the fundamental fallacy that launched a thousand news articles: Dairy was dying as consumers were switching to plant-based beverages. That was always a lie — but at least from a certain angle, it could be stretched into something that at least somewhat looked it like could be true. After all, U.S. fluid milk consumption (though not dairy overall, a fact that was conveniently ignored) has declined, and plant-based beverage sales were rising.

But now even that distortion is no longer true. Retail sales volume of plant-based beverages year-over-year have been negative since February, continuing a trend of flat-to-declining volume that dates to mid-2021. This is no longer a blip – it’s a reality, an inconvenient truth that we hope may finally put the original lie to rest. 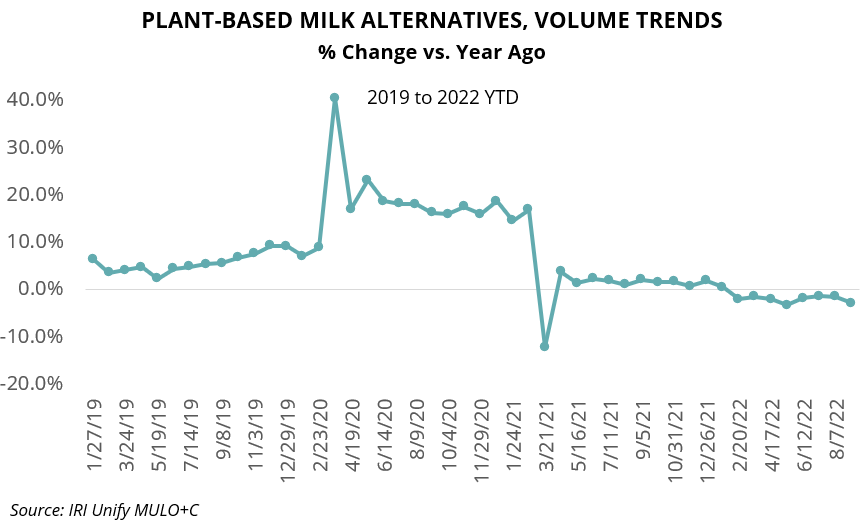 Declining sales are only some of the woes Team Plant-Based is facing. While eating your fruits and veggies remains good advice – and always will be – that doesn’t mean that ditching dairy nutrients, or animal protein and nutrition in general, is a good idea. The environmental claims of alternatives can be wildly overstated. The nutrition benefits often remain doubtful. And once the novelty wears off, imitator inferiority is left to shine through.

Maybe that’s why Oatly’s share price has declined more than 80 percent since going public last year. Maybe that’s why Beyond Meat is struggling, and the CEO of Maple Leaf Foods said the alts market is unlikely to pan out as originally thought.

And maybe it’s another reason why the Food and Drug Administration shouldn’t reward bad-faith arguments from desperate plant-based promoters that consumer acceptance of their heavily processed, sweetened water as “milk” is inevitable, and they should be rewarded for insisting on misusing a term they have no right to use under existing federal regulation.

If nothing else, perhaps declining sales would inject some welcome humility into marketing claims. Of course, we live in the real world, making that outcome, however desirable, highly doubtful.

But at the very least, the news of declining plant-based beverage sales should be reported just as forcefully as the distortion that was used to malign an entire industry. After being told for years that plant-based beverages were the wave of the future, the public would be well-served to know that the hype was a mirage.