Last week, dairy producers, member cooperatives, Young Cooperators (YCs), industry representatives, staff, and others from all over the country met at the Walt Disney World Dolphin Hotel in Orlando, FL for NMPF’s annual meeting, which is held jointly every year with the National Dairy Promotion and Research Board and the United Dairy Industry Association.

During the meeting, NMPF Chairman Randy Mooney and President & CEO Jerry Kozak addressed the NMPF membership and discussed the organization’s progress over the past year. They provided updates on efforts to pass a new Farm Bill that includes NMPF’s dairy policy reform package, known as the Dairy Security Act.

They also discussed other priority issues that the organization had dealt with in the past year, touching on topics like the National Dairy FARM (Farmers Assuring Responsible Management) Program, the Trans-Pacific Partnership Free Trade Agreement, and NMPF’s management of the REAL® Seal program.

Mooney and Kozak’s joint presentation emphasized the proactive attitude the organization assumed throughout the year, partly because “we face a future of reduced government support on the one hand, and more government intrusion on the other,” Mooney explained.

The eight officers currently serving NMPF were reelected to their existing positions. They include:

In addition to the officer elections at this year’s meeting, NMPF recognized three outgoing directors for their service on the NMPF Board of Directors: Tom Croner, from Berlin, Pennsylvania, and Les Hardesty, from Greeley, Colorado, both representing Dairy Farmers of America, and Clyde Rutherford, Syracuse, New York, representing Dairylea Cooperative. NMPF also recognized four Honorary Directors, who provided exemplary service not only to NMPF, but also to the entire dairy industry: Lew Gardner from Galeton, Pennsylvania; along with Tom Croner, Les Hardesty, and Clyde Rutherford. 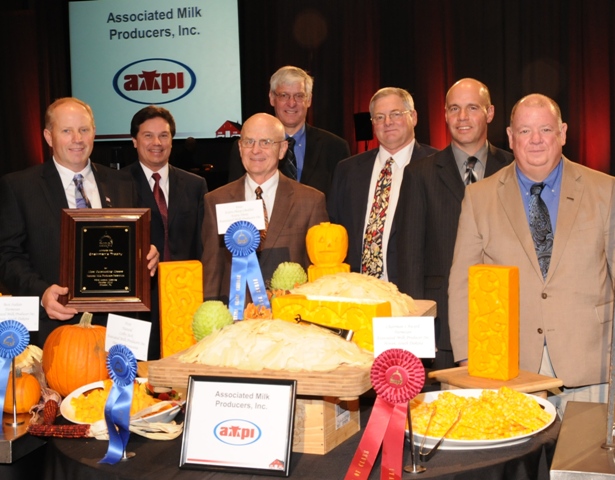 In other news at the annual meeting, a Parmesan cheese made by Associated Milk Producers Inc. (AMPI) was awarded the Grand Champion Cheese award at the 2012 NMPF cheese competition. The cheese, made in Hoven, South Dakota, received a score of 99.0 from the judges. The AMPI Parmesan was selected from among 176 entries to this year’s NMPF cheese contest – a record number of entries. A total of 3,006 pounds of cheese was judged. (Right: AMPI representatives accept the Chairman’s Plaque for their winning Parmesan.)