New Congress Will Include a Bipartisan Dairy Farmer Caucus 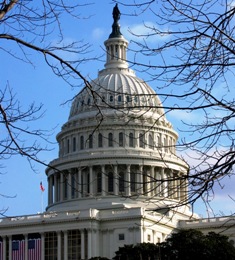 The new 114th Congress will feature a large and active group of House members looking out for the interests of dairy farmers, thanks to efforts made by NMPF to work with the caucus to facilitate a dialogue between farmers and elected officials.

“The 85-member caucus in 2013-14 was nearly one-fifth of the House,” said Vice President for Government Relations John Hollay. “We expect the 2015 caucus will be at least that large.” Hollay added that the dairy group is one of the most bipartisan and regionally diverse of the many caucuses in Congress.

The Dairy Farmer caucus educates House members on dairy industry issues and helps build consensus on legislation impacting milk producers and processors. For example, Hollay said, the caucus played a key role in enacting the 2015 farm bill, which included the most significant rewrite of federal dairy policy in more than a generation.

In recent years, the caucus has worked closely with the NMPF and the dairy industry to secure emergency funding for farmers suffering from low prices and disasters, protect dairy trade interests and secure passage of federal nutrition programs that deliver nutritious dairy products to children in schools.