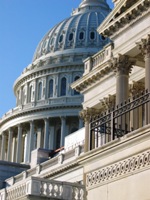 Congress is still wrangling over the contents of a new farm bill proposal, and the timing of final passage of the legislation is likely to slip later into January as NMPF and other supporters of the Dairy Security Act fight to keep that policy measure in the final bill.

A House-Senate conference committee was expected to formally unveil the details of a compromise farm bill this past week, but disputes over dairy policy, payment limitations, catfish inspections, and state egg production standards all combined to slow the process down. Reports are that the long-standing dispute over food stamps will be settled by adjusting eligibility requirements that will reduce program spending approximately $9 billion over 10 years – less than the House’s suggested cut of $40 billion, but higher than the Senate’s proposed cut of $4 billion.

The farm bill conference’s four leaders had agreed to include in the final bill the dairy proposal that both the House and Senate agriculture committees approved last year. That proposal – essentially, the Dairy Security Act backed by NMPF – establishes a new safety net for dairy farmers containing a margin insurance program, combined with a market stabilization mechanism to protect both farmers and taxpayers. However, House Speaker John Boehner has reiterated his concerns about market stabilization, clouding the prospects of the farm bill package.

“The stabilization program is designed to both reduce the duration of low margin conditions, and reduce costs,” said NMPF President and CEO Jim Mulhern. “Without it, margin insurance alone could be a budget-buster – and a program Congress should reject. We firmly believe that the contents of the dairy title should be based on what is the best policy for the future, not on desperate threats and last-minute politics.”

NMPF last month circulated a Congressional Research Service analysis of the competing House and Senate dairy plans, which showed the Senate language, with the market stabilization component, will cost $100 million less over 10 years than the House program.

Until a final bill is approved, many farm programs, including the dairy program, are technically operating under farm laws dating to 1949 and 1938. But Agriculture Secretary Tom Vilsack said in December there would be no immediate impact, since he will delay efforts to draft the rules putting the 65-year-old law into effect, as long as it appears a new farm bill is imminent. However, as high-level farm bill negotiations continue, the specter of a return to permanent law remains on the horizon.

Mulhern noted that concerns about the market stabilization program ought to be put into perspective by the potential impact of much, much higher levels of government intervention in the market, due to a return to 1949 levels of parity pricing, “which could nearly double consumer milk prices. That prospect should be a really big concern to everyone. That’s the issue at stake in what happens next,” he said.