ARLINGTON, VA. – The popular Dairy Margin Coverage program signed up more than 22,000 dairy farmers – more than participated in the last year of the Margin Protection Program that it replaced — and paid out more than $302 million in its first year. That’s $302 million more than what farmers would have received under the MPP, which would have actually cost farmers money in 2019, according to an analysis of USDA data done by NMPF.

Monthly milk price/feed cost margins so far in 2019 have been above the $8 per hundredweight coverage cutoff that existed under MPP, but below the new $9.50 per hundredweight coverage limit under DMC, the stronger dairy safety net enacted last year in the farm bill. Under the old MPP rules, the total paid out under the entire program so far this year would have been $75,000 — about $3 per farmer and a net loss for them after premium costs. Instead, the new DMC threshold has triggered hundreds of millions of dollars in much-needed assistance for dairy producers, showing the program’s value and helping farmers stay afloat who otherwise may not have been able to continue.

With 2020 signup beginning on Oct. 7, that success is worth keeping in mind as farmers weigh the program’s affordable cost versus its proven benefits.

“The Dairy Margin Coverage program has proven its worth, with more than $300 million in farmers’ pockets as a result of our work on the farm bill with Congress and USDA,” said Jim Mulhern, president and CEO of the National Milk Producers Federation. “None of that assistance would have occurred under the MPP. We encourage farmers who haven’t already signed up for all five years of Dairy Margin Coverage to re-new their sign up for 2020, and for farmers who decided not to participate in the 2019 program to consider it in the future.”

According to the latest USDA data, 22,631 dairy producers signed up for DMC. Based on reported margins for the first eight months of the year, payouts so far for 2019 have been $302,906,824. Wisconsin signed up the largest number of farmers, while California enrolled the highest production volume of any state. 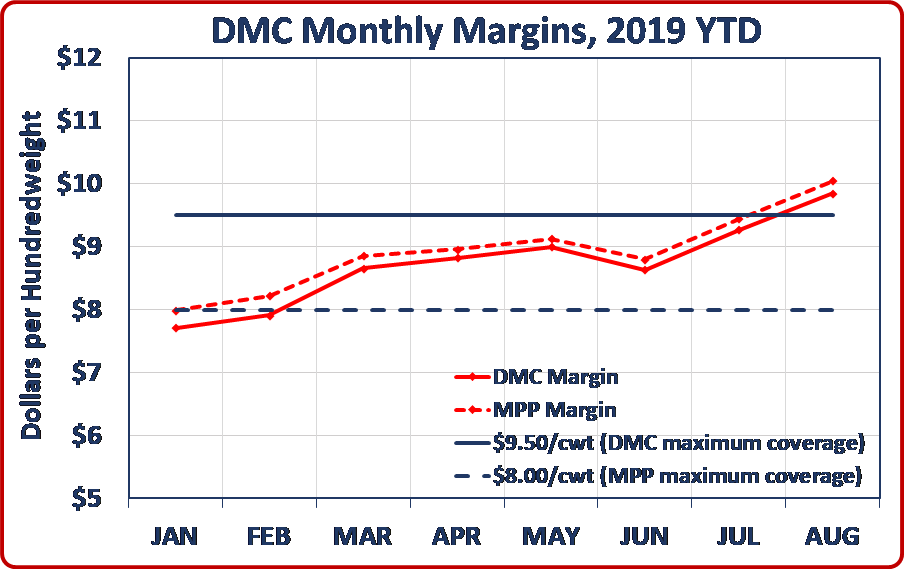 A key change to the program that boosted aid was the inclusion of dairy-quality alfalfa into the feed-cost calculation, which narrowed the difference between milk prices and feed costs and adjusted margins to better reflect dairy expenses, a change that NMPF pushed for throughout legislation and implementation.

“We thank USDA not only for prioritizing the DMC in farm-bill implementation but adjusting it in a way that provided additional benefit to producers,” Mulhern said. “The DMC’s success has truly been a partnership throughout, from a united dairy community that aided Congress as it crafted and approved the program, to USDA’s work with that community in making it reality.”