Dairy Defined: Which Farm Voters Hold the Key to 2020? The Ones Milking Cows

ARLINGTON, Va. – In less than a year, someone will take the presidential oath of office, charged with leading America for the following four years. To get there, whomever wins the 2020 election – a competition that starts in earnest with next week’s Iowa caucuses – will need to win over key constituencies, including farmers and rural voters.

This isn’t a revelation. So many articles have been written since 2016 taking the temperature of voters in Flyover Country that it may be difficult to find a farmer who hasn’t been interviewed by a coastal media outlet. But looking at the farm vote with a little more depth, it’s worth noting which farmers are best-positioned to hold the keys to the White House. Looking at the electoral map, those farmers may be the ones milking cows.

In 2020, dairy farmers find themselves unusually concentrated in states with large numbers of electoral votes, and in swing states, compared to producers of other agricultural commodities. A presidential candidate who wins the five biggest milk-producing states (California, Wisconsin, New York, Idaho and Texas) would gain 136 electoral votes, more than half the total needed to win the White House. Winning the top five growers of the most-valuable crops — corn and soybeans — in comparison, would only get 52 votes.

The top five cattle states garner 111 electoral votes. Top wheat states hold 28 electoral votes. Other ag products tend to be highly regional or have most of their production in a limited number of states.

Of course, barring an extreme shift in U.S. political coalitions, no candidate is likely to count California, Wisconsin, New York, Idaho and Texas in their win column on Nov. 3, so perhaps dairy’s large-state prominence isn’t 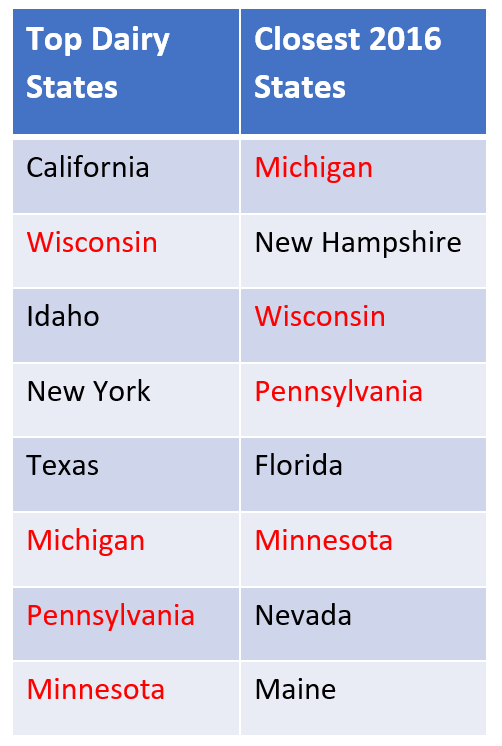 relevant. After all, conventional wisdom holds that presidential contests are decided by swing states – the ones that aren’t deeply Democratic or Republican and might make the difference for a candidate.

So, how important is dairy in swing states?

Let’s look at two lists – the top eight U.S. dairy states, and the eight closest states in the 2016 presidential election. Notice anything? Wisconsin, Michigan, Pennsylvania and Minnesota – three states that flipped the White House to President Donald Trump in 2016, and another state that came very close – are all top dairy producers.

Dairy’s swing-state strength is the confluence of the industry’s history and America’s political evolution. Livestock and commodity crops were served by railroad networks that could transport the bounty of Midwest and Plains states to more heavily populated regions. Dairy, being more perishable, developed closer to urban areas. As U.S. politics has become increasingly polarized on urban-rural lines, dairy farmers find themselves living in states where big cities and small towns collide.

Dairy farmers live where the political battlegrounds are. They didn’t ask to be there, but if they’re potential difference-makers, it’s worth knowing what they want. Expanded exports are a start. A workable farm-labor system is needed to maintain productivity. Making sure that fake dairy products are properly labeled would go a long way toward ending consumer deception and warming a dairy farmer’s heart. And maybe a candidate could consider drinking a refreshing glass of whole milk at an event – it’s good for them, in many ways.

The next year will be exciting, and crucial for the direction of America. Dairy farmers will play an important role in this decision. We at NMPF already know how much dairy votes matter. Smart candidates will know that too.

Our thanks to @RepStefanik and @RepBonamici for their leadership on a bipartisan letter requesting @USDA provide container size flexibility in the WIC program to improve access to nutritious and delicious #dairy. Read the letter here: bit.ly/3rVmepY pic.twitter.com/Ekv4TYQjxC 15 hours ago