Dairy Defined: Lactose-Free Milk is Growing Faster Than Plant-Based. You Didn’t Know That?

ARLINGTON, Va. – This might be tough to digest if you’re a plant-based fundamentalist, but the numbers don’t lie: In 2019, lactose-free milk sales grew twice as fast as plant-based beverages, with lactose-free poised to surpass almond-beverage sales this year.

How could this be, given the hyperbole about dairy’s decline and the rise of plant-based beverages? Well…

Contrary to some portrayals, the dairy sector is full of innovation, and lactose-free is a prime example of how dairy is addressing per-capita drops in fluid-milk consumption. Dairy categories increasing their sales, including whole milk (now more than two-fifths of consumer sales), lactose-free milk and flavored varieties, are giving plenty of reason for optimism about the future of milk. Meanwhile, plant-foods companies are “innovating” by figuring out which nut or seed to run through the grinder next. Soybeans, then almonds, then oats, and then … if past is prologue, pecans and pistachios are probably getting nervous.

This isn’t to suggest that some plant-based beverage sales aren’t growing.  Indeed, some categories are rising quickly, but they’re growing from a tiny base. 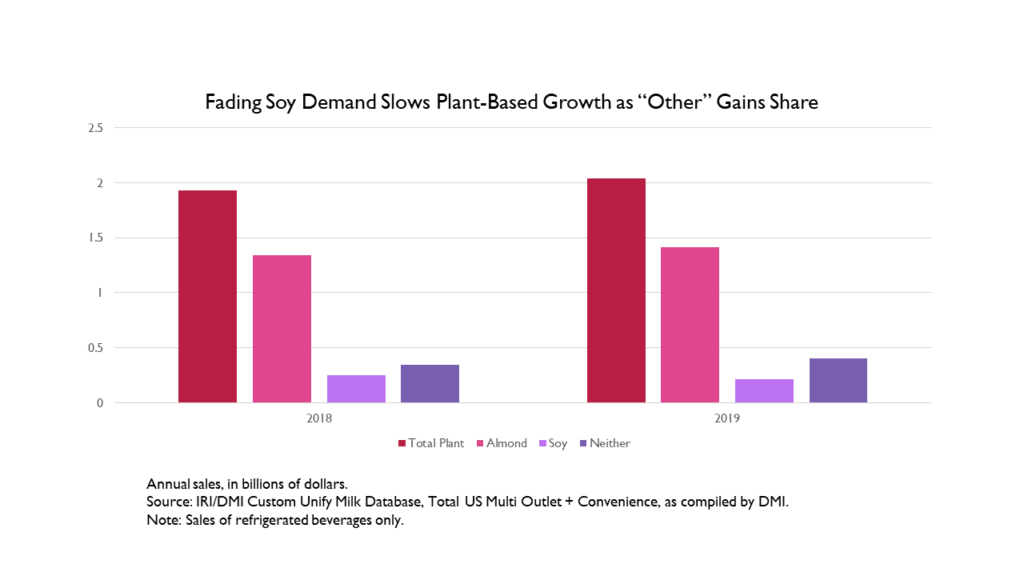 Breaking it down further: Almonds, with about three-quarters of sales, drive the plant-based beverage category. And almond-beverage sales are growing (although not as fast as lactose-free milk). Among plant-based beverages that aren’t almonds, soy is #2. But soy is declining, in 2018 by more than 13 percent from $248 million to $215 million, a percentage drop much greater than any sales decline in dairy. (We’re still waiting for the “Death of Soy” articles to be written, by the way.) Oat-based beverages are growing fast –an eye-popping 872 percent in 2019. But that will be impossible to sustain given its an incredibly small base: $7 million in 2018 to $68 million in 2019.

So again – why does the plant-based-rising-as-dairy-declines narrative even exist? Because upstarts need to cast themselves as innovators — even as their “innovations” use a lot of water and offer questionable nutrition – to justify the marketing and refrigerated shelf-space budgets spent to convince consumers they’re the Next Big Thing. Many of them pay slotting fees to enter the dairy case and call themselves “milks” – a category in which, nutritionally, they don’t belong. And they do that because the FDA lets them – which, given the FDA’s own labeling rules, they shouldn’t.

New and small vs. old-and-big is an ancient narrative – but miscast narratives, however easy to repeat, impede accuracy, and in this case, public health too. The growth of categories like lactose-free milk, greater innovation within dairy, contrasted with the growth-to-plateau-to-decline of some plant-based products (cashews, rice, hemp and hazelnuts – all saw sales drop last year) are all fresh, under-covered narratives.

The numbers are there. It might be worth a look.

Our thanks to @RepStefanik and @RepBonamici for their leadership on a bipartisan letter requesting @USDA provide container size flexibility in the WIC program to improve access to nutritious and delicious #dairy. Read the letter here: bit.ly/3rVmepY pic.twitter.com/Ekv4TYQjxC 14 hours ago