According to political forecasting website fivethirtyeight.com, Pennsylvania is currently rated as the most likely “tipping point” state in this year’s presidential election – the one most likely to put a presidential candidate past 270 electoral votes and into the White House in 2021. Wisconsin has also taken its turn at the top of the rankings of most-crucial states.

Other leading swing states include Michigan and Minnesota. These states have more in common than simply being politically competitive – central to deciding the White House in 2016 and top battlegrounds again. They’re also among the top U.S. dairy producers, putting dairy farmers at the center of an election that 69 percent of Americans consider the most important of their lifetimes.

Media articles have said that Wisconsin dairy farmers may hold the key to the White House, and dairy’s voting significance isn’t limited to the upper Midwest. Ohio, Florida, Arizona, Iowa, Texas — all of them are being actively targeted by campaigns, and each has a significant dairy presence. Much has been made of the importance of “the farm vote” in 2020. But through accident or historical design, the farmers who may have the most say in this year’s key campaigns are the ones milking cows. 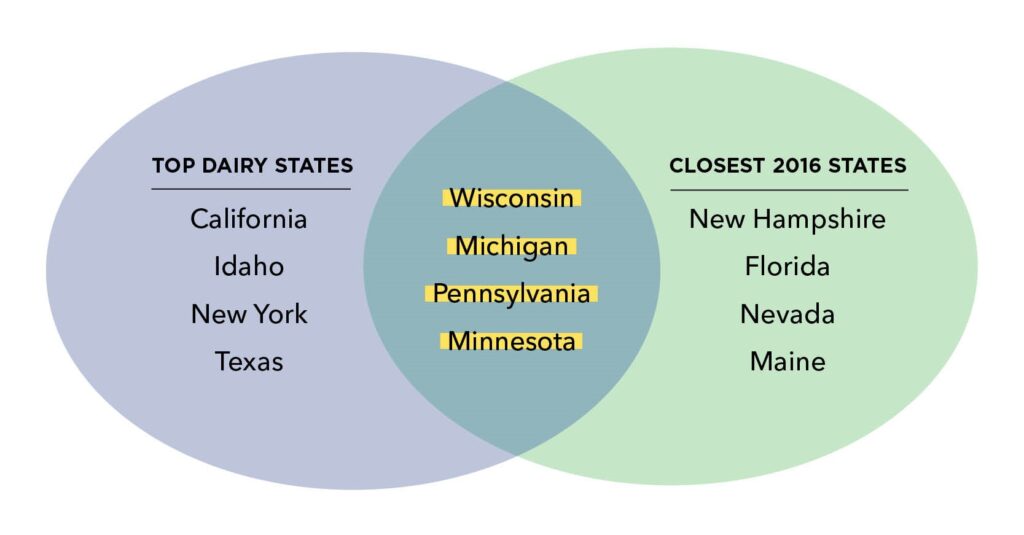 With so much attention focused on where they live, what should dairy farmers or industry allies do? It all comes down to basic civics and citizenship. People vote their conscience – but from a dairy perspective, here are a few thoughts that might be helpful when considering who to vote for, at all levels of federal races.

Voting in 2020 is as vital to dairy farmers as dairy products themselves are to a nutritious diet. To be better informed on dairy positions on important issues, visit the National Milk Producers Federation’s Policy Priorities pulldown on its home page, nmpf.org. NMPF also has a call-to-action page for people who wish to lend their voices to support dairy farmers and the broader industry.

Engagement is crucial, and dairy voices are especially important this year. Everyone has a part to play in making them heard. In the United States, the ballot remains the most effective expression of all. From now through Nov. 3: Choose wisely.

Sen. @gillibrandny’s legislation, cosponsored by @SenatorLeahy and @SenatorCollins, adds bipartisan momentum to critical #milk pricing discussions. We look forward to continuing our work with @USDA and Congress to remedy deficiencies in the #ClassIMover formula and other reforms. 56 mins ago