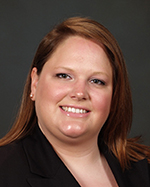 Meredith was recognized in the 30 and under category at PR News’ annual PR People Awards lunch, held at the National Press Club in Washington.

Meredith (in the photo), was nominated for the award by the Animal Agriculture Alliance, where she worked until October. In two years with the Alliance, she substantially increased the organization’s news coverage and was interviewed by news outlets ranging from Al Jazeera to The Washington Post. She also defended livestock agriculture on The Daily Show with Jon Stewart.

Meredith oversees NMPF’s animal care program, Farmers Assuring Responsible Management (FARM).  She is a Wisconsin native with a degree in mass communications and international affairs from The George Washington University. She also has a law degree from Seton Hall University.