The fake dairy issue isn’t going away. Neither are we.

Effectively representing the interests of the nation’s dairy farmers and their cooperatives requires a balance of short-, intermediate-, and long-term efforts. Nowhere is that principle more evident than in our fight against fake milk and milk products – and it motivates why we’re opening another chapter in a saga we believe will have a successful conclusion.

While the dairy industry has gone through booms and busts, advances and setbacks, the fake-dairy product issue has always loomed as one of the sector’s longest-term struggles. We’ve been engaging the FDA on it since at least 1979. Its echoes reach back even further – dairy history buffs may recall regulatory battles more than 80 years ago against plant-based alternatives we now call “margarine.”

But last summer, prompted by our persistent efforts and crystallized by FDA Commissioner Scott Gottlieb’s famous declaration that “almonds don’t lactate,” fake milk quickly became a hot-button, near-term priority. The FDA (finally) moved, and it triggered an all-hands-on-deck effort as we rallied our members to make sure dairy and its consumers stood united in support of transparency in the marketplace. An FDA request for information on labeling attracted more than 14,000 comments – a docket we won on substance, as the American Academy of Pediatrics, the School Nutrition Association, and a range of others came to our side.

The comment docket is closed now. Scott Gottlieb is moving on from FDA. With the agency’s request for information fulfilled, the most interested commissioner of the past four decades gone, and dairy farmers facing acute economic circumstances that dominate present concerns, one could easily fear that fake milk will return to a back-burner.

We are confident that will not be the case, and we are actively working to make sure it won’t.

Following the FDA docket’s conclusion, we analyzed comments, took a close look at the opposition arguments made within it, and refined our own “Road Map” that we had been working on since last September to resolve the fake-dairy issue. On Feb. 21 we submitted our proposal to the FDA as a Citizen Petition – and the FDA has opened a new docket and  set a comment period for stakeholders with a deadline of Aug. 20, 2019. The Citizen Petition gives the agency what it needs to resolve this issue to the benefit of consumers by improving labeling transparency and truthfulness.

Our key points – the ones the FDA must consider as it fulfills its mission of serving the public interest – include:

This effort complements our ongoing work to create the best possible environment into which milk producers can sell their products. Along with the new Dairy Margin Coverage program that improves the financial safety net for our farmers and our continued vigilance to expand international markets to boost demand, the fake-milk fight improves farmer fortunes by ensuring that U.S. consumers will choose products in a transparent and truthful marketplace – because we know that when competition is fair, dairy will be recognized as the superior choice that it is.

Our Citizen Petition is only one indicator of continued urgency. Others include the re-introduction of the DAIRY Pride Act in Congress, a bipartisan, bicameral effort led in the Senate by Senators Tammy Baldwin (D-WI) and Jim Risch (R-ID) and in the House by Reps. Peter Welch (D-VT) and Mike Simpson (R-ID). The legislation lets the FDA know that if it doesn’t act, Congress is prepared to demand enforcement of current labeling rules governing plant-based imitators. With the public momentum we have gained in the past year, the road map we have presented to FDA, the efforts of our friends in Congress, and our dogged determination, fake milk labeling is an issue whose time for resolution has arrived.

Because of the nature of government decision-making we can’t quite say resolution will be immediate. We don’t control the FDA, and leadership transitions and competing priorities undeniably consume time. But this issue has never been about one person or one administration. And we believe this matter is now one that will be resolved sooner rather than later.

That’s a key part of how this has shifted from the old days, when we knew that we were right on principle, but opportunities to advance that principle were limited by bureaucratic intransigence. Now, through the hard work and support of the dairy community, as well as our tenacity on this issue, prospects for positive resolution are higher than ever, for good reason. The dairy community must stay engaged with us, and together we will see this through. 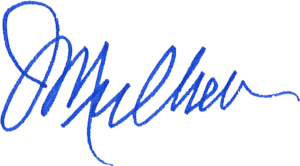 We are honored be part of @USDA and @USTradeRep’s Agricultural Policy Advisory Committee. In this role, CEO Jim Mulhern will continue to provide guidance on a wide range of agricultural trade issues. twitter.com/USDAForeignAg/… 3 days ago