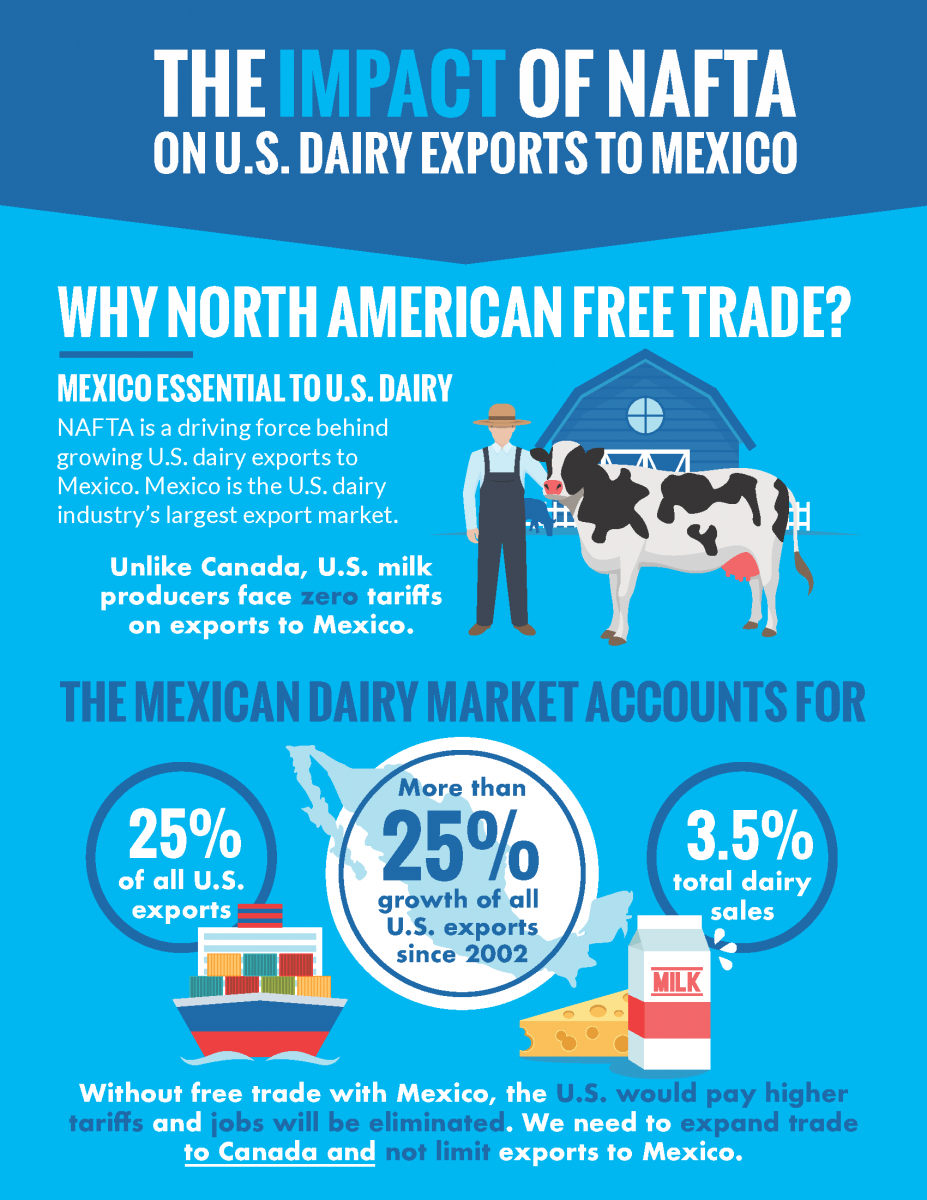 As the latest round of NAFTA modernization negotiations concluded last week, NMPF continues to emphasize the importance of using the trade talks to address U.S. dairy trade priorities.

NMPF’s Jaime Castaneda flew to Mexico late last month to hold meetings with U.S. and foreign government officials and attend confidential trade advisor consultation sessions during the seventh NAFTA round that took place from Feb. 25-Mar. 5. While there, he also met with key Mexican industry allies whose support NMPF has cultivated on several of the U.S. dairy industry’s key NAFTA goals, including the importance of preserving the free flow of dairy products between the U.S. and Mexico.

Those sales from the U.S. were the focus of a report released last week by Informa Economics, which found that the current free trade agreement with Mexico is the driving force behind $1.2 billion in U.S. dairy exports to our southern neighbor, as well as billions more in related economic contributions. Informa’s analysis (prepared for the U.S. Dairy Export Council) reported that for every $1 of sales associated with dairy exports to Mexico, an additional $2.50 in output is supported elsewhere in the U.S. economy. U.S. dairy exports to Mexico also created 16,492 full-time equivalent jobs while directly generating an aggregate GDP of $8.4 billion over that five-year period.

“As this analysis shows, the relationship between the U.S. and Mexican dairy sectors is of great importance, not just to our producers, but to our economy as a whole,” said Jim Mulhern, president and CEO of the National Milk Producers Federation (NMPF). “We are committed to working toward a modernized NAFTA agreement that preserves this open and dependable trade relationship with Mexico, while removing massive barriers to dairy trade with Canada that were not adequately addressed in the original agreement.”

Also last month, Ways and Means Chairman Kevin Brady and Ranking Member Richard Neal led a bipartisan delegation to attend the recent NAFTA negotiations in Mexico. Shortly prior to the trip, Brady noted that, “…I think there’s potential for major wins for President Trump in NAFTA in the areas of energy, intellectual property, agriculture, improvement of customs flow and digital trade.”

This Congressional delegation’s participation at the seventh round of talks followed on the heels of one led by the Ways & Mean’s Trade Subcommittee leadership to Canada just last month. Immediately prior to that visit, NMPF had written a joint letter with USDEC to the entire Committee reminding them of dairy’s top priorities in NAFTA.  NMPF’s focus will remain on ensuring that progress on this agreement’s modernization incorporates dairy farmers’ top priorities for a successful NAFTA result.