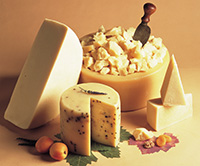 Later in December, NMPF, USDEC and IDFA jointly applauded a commitment to stronger protections for common food names resulting from talks through the U.S.-China Joint Commission on Commerce and Trade. The favorable outcome should facilitate export of products like feta and parmesan cheese to China, which is a particularly large and fast-growing market for U.S. dairy products.

“We especially appreciate U.S. negotiators’ recognition of the importance of common name preservation to U.S. exports and the heightened focus that the Obama administration has given to a key dairy industry priority,” said NMPF President and CEO Jim Mulhern.

Common food names and their relationship to geographical indications (GIs) has generated considerable discussion due to European Union efforts to impose bans on the use of feta, parmesan, asiago, muenster and other common names in international trade unless the products are manufactured in Europe. For more information, read “U.S. Fact Sheet: 25th U.S.-China Joint Commission on Commerce and Trade.”